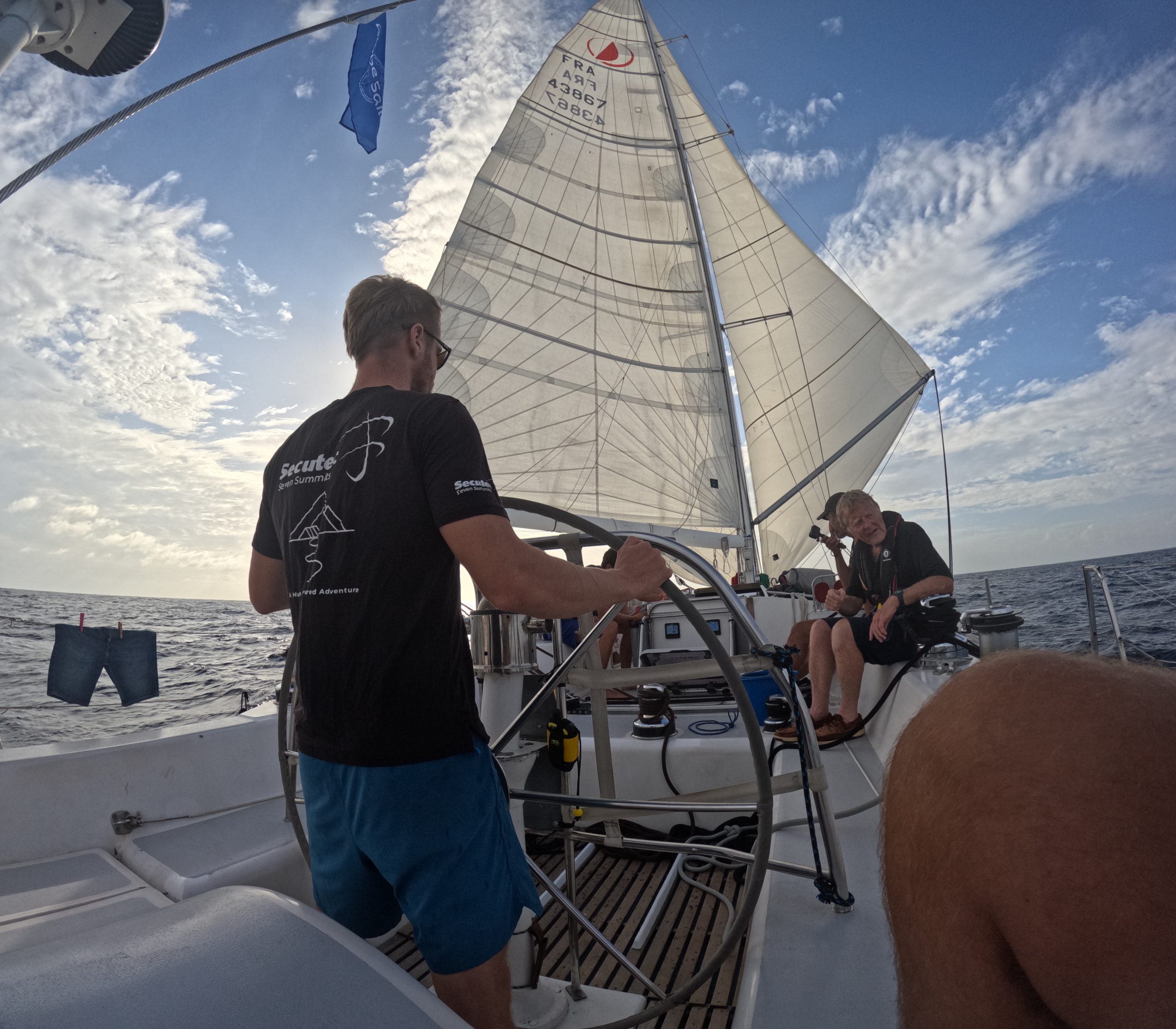 After my days off the boat in Gran Canaria we finally departed on the 20th of November for the ocean crossing to saint Lucia. A crossing that was supposed to be straightforward didn’t live up to the expectations, one part of that is adventure for sure and I love that, another part left me quite frustrated. I’m happy there were some very nice people on board for my mental health. About that, I’ll get more into it in a next post.

I was looking forward to the start of this crossing, not because of the sailing but mainly to get this done. A mistake I have made, because it made progress a bit more slow in my experience. When we started I was excited and the first night we had some high winds coming up. With the first mate I’m doing some manoeuvres on deck. For about 30 minutes we get swept by incoming waves and we make up a good fight to get all the rope and sail work done. I’m completely drenched, but pretty happy about the excitement, although he had to shout wat I need to do while doing it and not explaining beforehand. I speak French, but these sailing terms make it more complicated to me.

The next days we get fair winds in a good direction and we’re making very good progress. I’m finding a bit more the rhythm of the watches. We have a schedule for 3 hours on, and 6 hours off. But it is hard for me to be on a boat like that mentally. I’m having some fun with nice people on board, but it gets very boring. I’m used of doing lot of physical activity in a day, and that gets reduced to 1 or 2 hours of exercise work. There are 3 English (native) and 8 French speaking people  on board and it seems that I’ve taken the role as a translator. The commands by the captain and first mate are given in French. It makes it a bit tiring because neither of both are my native language which means I regularly translate these in my head in 3 different languages. It’s especially difficult when not given the time to do that and people are just shouting what to do in general.

Who broke the boom?

After 5 days of sailing I get up in the morning about to start my shift. The captain says, lets jibe (changing the direction of the sails). He yells to the people what they have to do and so we all do. Being at the helm, he gets a nice overview of what we are doing on the boat. One lady is winching the main sail and finds it very hard to do. There is something wrong, but the captain yells to hurry (nobody knows why we should hurry) and another guy jumps in to help. With 2 people they are winching hard on instruction, until BANG… The boom (horizontal part of the mast) breaks. A crazy sight to see and I think, fuck, it’s over. We have a big problem. The captain ended blaming the crew, which still frustrates me for not taking any responsibility. In the end we were still able to sail to Cape Verde to get it fixed. It ook 4 days to fix it in Cape Verde. For me a nice break from the sailboat but we still needed to do the crossing.

The weather got a lot warmer from Cape Verde and the whole crossing was getting harder on me. We had some good winds, but after a while they dropped. So it became even harder and hotter. Sleeping is very hard, with 3 in a cabin an almost no ventilation. Regularly I try to find a place in the sail locker (which stinks from the moist) or at night on deck. We’re all in the same situation and mentally it was hitting me hard to be for such a long time on a boat. Dustin, who’s father worked for years on boats, told him once “boats are like prisons you can drown on”. To me it really felt like that. I get a big sense of freedom from my bike and climbing mountains. And I understand people get the exact same feeling on boats, but not me.

Because of the low winds from time to time, the captain decides to motor parts of it. I think it’s sad, but as I explained in a previous post, this is a plan B where I didn’t have the luxury to take too long to decide on things and still better and more adventurous than flying to Denali. When we are all sick of being in this situation Aurore gets the best idea. Let’s just all turn things off and have a swim in the ocean. So we did and that was an amazing feeling, surrounded only by water and cooling off in it (I have a video of it which I couldn’t upload here with limited internet, but check my social media for that 😉 ).

Finally after such a long time on this boat, I’m very happy to see first land. We arrive in saint lucia on the 15th of December. Most people rush off the boat (including me) because we have a big delay in the schedule. So the whole trip ended quite abruptly leaving me with mixed feelings about the whole crossing. In St Lucia I’m meeting up with Alf, the captain of the next boat which I will be crew on until Panama. Feeling hopeful for a better sailing experience we prepare for the next 1000 miles across the Caribbean Sea.

I learned my lessons about this crossing and people wanting to do a similar thing, you cancontact me so I can explain the do’s and don’ts for this. I hate to do this, but in my 10 years of this adventure I never experienced something like this: don’t go with Challenge Ocean. I don’t want to get too deep into this and bashing people or a company, but I’m definitely not the only person with these feelings about it.

Special thanks to my sponsors who help me make this crazy adventure come true!