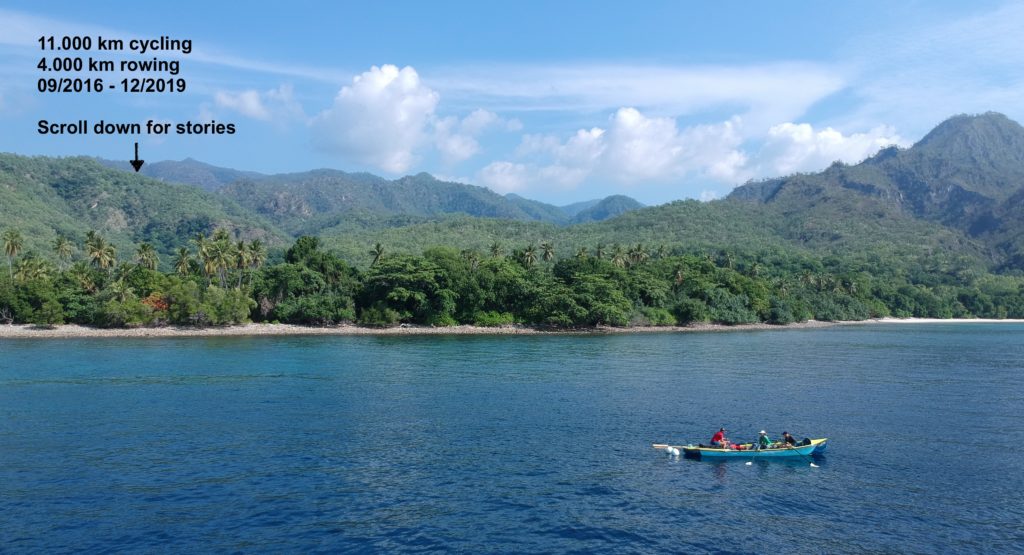 This page includes an overview of my cycling (+10.000 km) and rowing (+4.000km) trip to the highest mountain of Oceania: Carstensz pyramid. Scroll down to read blog posts of this continent

Off to the 3rd summit!

After the summit of Mount Everest I cycled from Kathmandu to Indonesia. Benjamien, a Belgian friend joined me on this first part. It was the first time someone was joining me on this project and we had great fun. We crossed from the east of Nepal over to India, Myanmar, Thailand, Malaysia and Indonesia. A trip of more than 9000 km in quite good conditions. Mostly we found enough food, water and places to sleep. This was the first brutal contact with the heat and I passed the equator by human power!

After cycling all the way to East Java, Malcolm (Australia) and I set off by rowboat. The goal was to follow the Indonesian archipelago to reach Papua. Everything wasn’t going as planned and we found lot’s of delays getting the boat to Indonesia by container ship. Still after a while we could start rowing and made a great first part from Java to Bali, Lombok and Sumbawa. We mainly slept on the beaches in our hammocks.

From Sumbawa to Flores my girlfriend came along to get a good push along the Komodo Islands. There we got a good taste of the waves hitting the beaches as we arrived in the evenings. The rainy season was full on which pushed us in the right directions but creating bigger swells and crashing waves while landing. Here I realised that this one was gonna be an extreme expedition.

From Flores, Steven, a Belgian friend joined me for about a week. Great experience to be rowing with him as the swell and wind were getting bigger. After he left I had about a month on my own from island to island.

In this month I realised the impact of being alone. It is very difficult to get the boat on land (200kg) and when it is anchored I don’t sleep that much. I need to recover from the past efforts but it is hardly possible. I got to know the real strong currents of the Indonesian through-flow which scared the sh** out of me a couple of times. Especially the crossing of the Alor strait with immense tide rips. Due to time limitations I had to cross this during full moon when the currents are strongest. I was extremely grateful for having such a good boat, I got very scared over there on my own.

In Alor Koen De Gezelle (Belgium, boat builder) and Gerhard (Netherlands) came along to join. There we did our first bigger crossings of 70km (11hrs) and more. We mainly rowed at night during these crossings so we could arrive with daylight. A very smart thing to do because while sleeping in a village at Pulau Wetar we heard about a fisherman being eaten by a crocodile that same morning… Another reminder of the dangers ahead of us.

After 2 weeks of rowing we say goodbye to Gerhard, sadly he got injured in his back and he makes the smart decision to fly back home. Koen and I carry on and we make great progress. By that time I’m already more than 3 months in the expedition and Koen is just getting in the rhythm. The big crossings are taking it’s toll and I get sick of it all. The biggest one so far was about 90 km which we did in 16 hrs, a real struggle since on every crossing I start to vomit when the sun comes up, mainly from exhaustion. The problem is that you just can’t stop, so I vomit and get back to rowing immediately, for a couple of hours more.

Getting sick and sick of it!

By the time Koen goes back from Saumlaki to Belgium, Mark arrives. We follow the main Island North to Pulau Larat. A comfortable row because no big crossings here. When he leaves I’m preparing for the next big crossing, 120km of open sea, the biggest one yet and alone. But my body decides differently and by the time I am at the crossing I’m already too weak and caught a tropical virus. I decide to go back to Belgium and leave the boat in a village with friends (thank you Poppy!).

Back to serious business

After this period I get back in October 2018 to finish the final phase. Again I’m alone to cover the big crossing. During the first part everything was going well, but I had 10l of good water and 20l of not so good water. By the time I started the other water I had to vomit every time I drank it. After 24 hours of rowing I started to hallucinate and after 35 hours of non stop rowing I got pulled off the sea by a boat (and 16km off shore). That was a brutal day and I needed to recover from that. I recovered and decided to get me brought back to the same place I got saved. In this way I was able to cover the lost distance and continued solo to Seram Island. I loved this trip as the seas where calm (except for some currents) and I felt getting stronger and stronger. The whole area is quite remote and I encountered some strange places…

In Seram island George Eden (UK) comes over to help me row. The last big crossing is to be made of about 90km. We discover a tiny island at about 20km offshore where we can take a couple of hours rest. This crossing takes us to the start of Raja Ampat, a true divers paradise. This was the most calm and impressive rowing I’ve done in Indonesia. Just a week longer and we reach Papua (Sorong). I get a bit emotional because of the amount of effort I’ve put in there to get to that point, +4000km of rowing in really tough conditions, becoming the first one to do such feat! There we swap our oars for bikes and set off for another new adventure.

From Sorong we set off in the unknown. We get some help by locals to find bikes, get our permits and maps. The problem but great thing is that nobody has ever cycled here before. We have no idea what the roads are like (no asphalt at all) or how many villages we would pass by to find food. Very soon we discover that this will be a very challenging ride. Lot’s of mountains, heat, jungle, rain, mud and so much more make this a difficult crossing. After a couple of days our bikes start to break down reducing our daily distances significantly. Every now and then a truck passes by and George tries to get a ride to the next city like that. The whole ride is amazing and I feel great on the bike. It is very though and we get very strange experiences there. From Papuan rebels to encounters with the strangest animals, construction sites in the middle of the jungle to special forces for protection. A very interesting place for sure and I really love the people there! In the last 3 days I head more into the mountains to Enarotali. These 3 days I cover about 8000 altitude meters in 270km, extreme!! An average tour de France covers 5000 altitude meters in a week…

The sad part is that recent tensions between rebels and the Indonesian army (even when we where there 16 people got killed, with more even coming up, including civilians) made it impossible for me to continue to the mountain human powered and I had to stop at Enarotali. I had to helicopter to Carstensz Pyramid (only 70 km) with an expedition. A great way to be climbing with more people from around the world. In the end we are 7 people going to the summit on the 1st of January. The climb itself is technical but for experienced climbers not very difficult. I enjoy the whole climb and in the end I try to arrive alone on the summit. I need this moment for myself, to think about what I’ve done here. For 2,5 years I trained, prepared, cycled and rowed every day to get to that point! For 10 minutes long I cry on the summit, take some pictures and descent back down, looking forward to get back home with friends and family…

Special thanks to my sponsors who make this unique adventure possible!